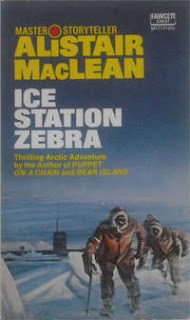 The Premise:
A submarine is sent to the North Pole in a race against time to save a group of scientists trapped at Drift Ice Station Zebra!

The Good:
Part Agatha Christie mystery, part Jack London tale of arctic survival--this story is just the sort of escapist entertainment a busy desk jockey needs to get out from under the day-to-day grind. It had well defined characters, descriptive well-written scenes, tension, life or death consequences and great pacing. And it didn't have any swearing or ooey-gooey romance, so it'd be a great adventure book for pre-teens or teens.

The Bad:
It's a thriller, so some of the characters are a bit over the top. It also takes place in the middle of the Cold War, which means younger readers may not get some of the references.

The Verdict:
Can you judge a book by its cover? I did when I picked it up for 50-cents at a thrift store and I didn't regret it a bit. Read it if you're looking for a nice palate cleanser. Apparently it was made into a movie starring Rock Hudson and Ernest Borgnine--the trailer doesn't do the book justice--which means that it was good enough for somebody, somewhere at some time.