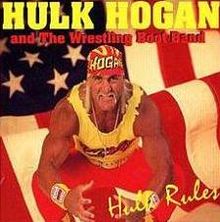 The Premise:
Professional wrestler, Hulk Hogan, sings and raps his way through 10 Hulk-tastic tracks with help from the musical stylings of the Wrestling Boot Band.

The Good:
If you thought this album would be one note, then brother, you’ve got another thing comin’. This album has more musical changes than the Hulkster has finishing moves. From rockin’ American ballads to heartfelt tributes to downright groovy melodies, man, this album has something for everyone. There’s even a tribute called “Hulkster in Heaven” and an inspirational song called “I want to be a Hulkamaniac” that gives away some of Hulk’s success secrets (don’t do drugs, stay in school, take your vitamins too).

The Bad:
The song, “Beach Patrol”, lacks a certain amount of “Hulkness” to it and the song, “Wrestling Boot Traveling Band”, is just a self-serving play to get attention by the backing band. Also, as music, this album is terrible.

The Verdict:
The best dollar I’ve ever spent.
Posted by Tad at 5:00 AM