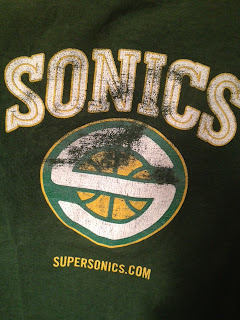 Congrats to the Seattle Supersonics for making the NBA finals. Oh wait. I don’t care.

I have nothing against the fine folks in Oklahoma and the one time I visited there the people were very nice and welcoming. If any fan base deserves a team, it’s them. But, again, I don’t care. I don’t care because the NBA doesn’t care. If it wanted me as a fan, it wouldn’t have moved my team so unceremoniously. But it did and I haven’t watched a game since.

Now, the St. Louis Rams are threatening to move the team if the city doesn’t build it a new stadium. And it’s the exact same situation: recently upgraded arena/stadium that’s not old enough to tear down, but too new to renovate just yet. Might I suggest … Oklahoma?

It’s like getting engaged to a girl who threatens to call off the wedding unless she gets a bigger diamond ring. After a certain point you just need to assess whether it’s worth all the crazy.

Because sports are supposed to be a distraction from daily life, not a cause for more stress. They’re supposed to give us things to talk about, not be the topic of conversation. Look, I like going to games and talking about this or that, but it’s not like there aren’t a million other distractions right around the corner.

Like the song says: “Buy me some peanuts and cracker jack. I don’t care if I never get back.”
Posted by Tad at 5:00 AM